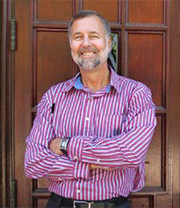 At a congregational meeting held on Sunday June 12, 2011 the members of RPC agreed unanimously to extend a call to the Rev. J Wesley Denyer who was, at that time, minister at St. Andrew’s Church Brampton. Subsequent approval was obtained from the two Presbyteries involved and Wes’ first Sunday in the pulpit at RPC was on September 11 with the formal Service of Induction taking place on September 18.

Wes has served at various levels of church government within the Presbyterian Church in Canada. At the presbytery level, he has served as Clerk, Moderator and Convenor of the Ministry Committee. At the national level, he has served as Convenor for the New Church Development Committee, the Stewards by Design National Organization Team and the Emmaus Project National Design Team. Wes has also served on the Stewardship Advisory Committee, the Knox College Board of Directors and Development Committee, and Assembly Council.

As a leadership style, Wes believes in the importance of a collaborative model of ministry, and congregational participation and transparency in decision making. Wes values excellence in worship and music, both in traditional and contemporary styles.

Wes is married to the Reverend Canon Dr. Judy Rois who serves as Executive Director of the Anglican Foundation of Canada. Wes has two children. His daughter Laurie is married to Graham Denyer Willis. Laurie is a research fellow at the London School of Hygiene and Tropical Medicine. His son Paul and his wife Julia live in Calgary, where Paul is a plumber. Wes has three grandchildren. His daughter is the mother of Arden, who was born in October of 2010 and Jude, who was born in January of 2014. His son Paul is the father of Emma, who was born in August of 2018.

We were one of the first Presbyterian Churches in Canada to have a repeat: Rev. J.B. Paulin served for six years, then returned a decade later for another 15 years! And then, we did it again with James Smart!

The following have been our ministers at Rosedale Presbyterian Church (photos of past ministers are in the hallway leading to the Upper Hall):