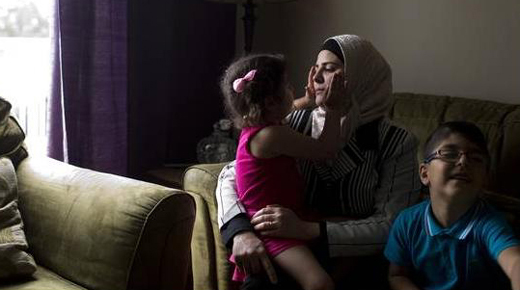 “I think this may be the last refugee crisis in which the churches
have the resources to respond on a large scale."  David Seljak,
professor of religious studies, St. Jerome’s University, Waterloo.

Ever since Canada became the first country to allow private sponsorship of refugees in 1979, churches and faith groups have been a pillar of its resettlement system. But as the country grows rapidly less religious, it may not be long before its ability to respond to a refugee crisis comes under the same demographic pressures confronting organized religion.

Recently, more than 25 dedicated citizens gathered in the stately meeting room of the Rosedale Presbyterian Church in Toronto to discuss how to bring a Syrian refugee to Canada, one of dozens of similar meetings being held across the county. Nearly all attendees were members of the church and they appeared knowledgeable, engaged and resourceful. But most participants were older than 60.

They had gathered for a presentation by Rob Shropshire, an employee of the church’s national office whose full-time job is to handle refugee sponsorship. Mr. Shropshire, a man with roughly 30 years’ experience on the file, assists these groups from beginning to end: encouraging them to understand the commitment they’re making and ensuring their paperwork is filed correctly. For the churches to fund such work is an enormous dedication of resources and expertise, and it occurs in nearly all of Canada’s major faith groups.

Slightly more than a decade ago, Canada admitted about twice as many government-assisted refugees as privately sponsored, but the streams began to converge after the Conservative government took office in 2006. By 2013, the number of new permanent residents who came as privately sponsored refugees, whose expenses in their first year in Canada are borne by citizens or faith groups, surpassed the number being assisted exclusively by the government, according to Library of Parliament research.

“When you look at these churches that sponsor refugees you’re going to see mainly people in their 60s, 70s and 80s,” said David Seljak,
professor of religious studies at St. Jerome’s University in Waterloo, Ont. He says church membership is in very rapid decline, more rapid than previously appreciated, and that also means a decline in financial and human resources.

“I think this may be the last refugee crisis in which the churches have the resources to respond on a large scale. They will respond in future, I hope they see it as part of their mission, but whether they’ll have the resources to do it is really an important question,” Prof. Seljak said.

“I think this may be the last refugee crisis in which the churches have the resources to respond on a large scale. They will respond in future, I Back in 1979, it seemed natural for the government to partner with religious institutions to help confront the Vietnamese refugee crisis. Religion played a much more important role in community life, and churches still had strong attendance and were seen as key stakeholders. The Presbyterian Church, for example, had 211,000 members in 1981. By 2011, that number had been cut roughly in half, in a country that had grown by 10 million people. ope they see it as part of their mission, but whether they’ll have the resources to do it is really an important question,” Prof. Seljak said.

“When you look at what’s going on [with refugee resettlement], you see great faith. They’re involved, they’re committed, but they’re seniors. They won’t be there forever,” Mr. Shropshire said.

Many Christian groups, guided by the biblical principle of welcoming the stranger, have done refugee-settlement work year after year, even when refugee issues were not leading the news agenda.

Rosedale Presbyterian sits in one of Canada’s wealthiest neighbourhoods and its meeting room, decorated with an oil painting and a grand fireplace, radiates a sense of permanence and stability. Still, the congregation only raises in the region of $400,000 a year, and sponsoring a refugee family at an estimated cost of about $50,000 represents a significant portion of its budget.

“It would mean digging deeply,” said Mark McElwain, a church member at the meeting. The church last sponsored a refugee in response to the Vietnamese crisis of 1979, he said.

The church’s minister, Wes Denyer, said he has worked at churches where the financial decision came down to fixing the church building or sponsoring a refugee. The congregation chose to help a refugee, he said.

Mr. Shropshire puts it this way: If you don’t reach out to help refugees, what’s the point of having a building? He deals with the change by encouraging groups to reach out to other congregations or to secular organizations, to capitalize on a broader pool of talent and energy and wealth.

“With changing demographics in our church, we’re all seeing cutbacks,” Mr. Shropshire said. “But we maintain this commitment to refugee resettlement.”